Toddlers are cavemen. If you’re reading this and are actually parenting a toddler, you probably don’t need further explanation. You’re familiar with the grunting, the lack of table manners, the random tantrums and general refusal to express emotions in a civilized way. See? Total caveman territory. Parenting guru Harvey Karp, who wrote Happiest Toddler On the Block as a follow up to his first bestselling book, Happiest Baby on the Block, uses this comparison as the basis for his popular techniques. We spoke to Dr. Karp about the six missteps he sees parents to toddlers making—and how to correct them in order to have a happier toddler (and as a result, home/marriage/life!).

Karp says toddlers are essentially cavemen. “Our job is to civilize them and teach them the niceties of our society, like saying please and thank you and sharing toys,” says Karp. This process takes place from about a year old until the child is about 5. The important thing to do while converting your cavemen and women into gentlemen and ladies? “Have appropriate expectations of your child—you’ll have good days and bad,” says Karp.

Over or Under Stimulating Them

TVs, iPads and other screens can quickly overstimulate a toddler, but if you skip TV and your house is instantly trashed? That’s because they’re understimulated. “Toddlers are meant to live outside,” says Karp. So get them into the park, into the backyard and into daycare and/or playgroups. Then, remember that your child is still a caveman/child. “Their brains are immature. The right brain, the emotional one, is stronger than the left brain, which controls executive functioning,” says Karp.  “Toddlers are not logical—even on a good day.” 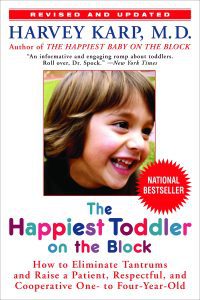 You’re Not Speaking Their Language

Reciprocity or turn taking is a key in any conversation and relationship, and that’s true in a marriage or with your toddler. If your toddler is happy, it’s natural to celebrate or be excited with them (Yay! Ice cream for dessert! Or, I’m so happy we’re going to Grandma’s!). But if they are upset, we suddenly turn into emotional zombies and try to calm them down, says Karp. “The key to empathy is not the words you say, but the way you say it and the look on your face. You need to reciprocate and validate their feelings,” says Karp. He recommends using short phrases, repetition, simplicity and tone to make sure they feel heard.

If you feel like you’re saying ‘no’ a lot, join the club. Unfortunately, Karp says we should be focusing on praising good behavior (he calls this “green light behavior” that we want to see more of; there’s also yellow behavior which is so-so but doesn’t need correction or encouragement and red light behavior which must be discouraged). “We usually catch them being bad rather than good,” says Karp.

Not Using The Gossiping Trick

Once you catch them in the act of “green light” behavior, compliment them and then “gossip” about it. Praising (or criticizing) toddlers to their face is effective, but even more so? Telling someone else about it, whether it’s another adult or a teddy bear (with a younger child). “This strategy of gossiping works, because we all believe what we overhear more than what we are told,” says Karp.

Karp isn’t against time out, but he says, “It’s not the only tool in your box.” Save it for dangerous behavior or serious rule-breaking. A playpen can be used to contain a young toddler who might not heed an instruction to stay in a chair. An alternative is to surprise them by clapping or even growling, while saying “Stop that…no pulling the dog’s tail!” “That’s a direct challenge to a Neanderthal,” says Karp. “They’ll stop because they’re stunned and then say good job and redirect them to the next thing.”

Still struggling with discipline? “Some kids just have to challenge the rules. They’re rebels and that’s how they’ll always be and it will be a good thing for them when they’re older,” says Karp.

For our story on baby and toddler sleep with advice from Dr. Karp, click here.

Dr. Harvey Karp is one of America’s most-trusted pediatricians and child development experts. He is on the faculty of the USC School of Medicine and a fellow of the American Academy of Pediatrics. Dr. Karp practiced pediatrics in Los Angeles for over 25 years. His landmark discoveries and unique ability to translate complex science into effective techniques to empower parents have revolutionized our understanding of the needs of young children. He is the founder and CEO of Happiest Baby, a smart-tech and parenting solutions company that invented the SNOO Smart Sleeper, a responsive bassinet that mimics the sounds and motions of the womb to extend infant sleep by 1-3 hours.

Dr. Karp is also the best-selling author of The Happiest Baby on the Block, The Happiest Toddler on the Block and The Happiest Baby Guide to Great Sleep. He is an advisor to Parents, Ser Padres and American Baby magazines and a pediatric expert on BabyCenter.  He has appeared numerous times on Good Morning America, CNN, Today Show, The View, Dr. Oz, etc. His work has been featured in the New York Times, Time, Newsweek, LA Times, Parents, People Magazine, among others.

This story originally appeared on The Local Moms Network.